21 NovThe Introduction for the History and Varieties of “Wadaiko”, Japanese Drums which Japan is Proud of.

The Introduction for the History and Varieties of “Wadaiko”, Japanese Drums which Japan is Proud of.

Music t is necessary for most of the people. We hear various kinds of sound in our daily life spontaneously.

Even those who usually don’t listen to music have the chance to hear it on TV or radio. There are few people who hate music.

There are many things that make sounds, and among them, the first thing we think of is musical instruments.

There are various kinds of musical instruments, and among them, I’m going to introduce “Wadaiko”, which Japanese people are proud of, and is originally made in Japan!

The History of Japanese Drums, “Wadaiko”

But, I don’t think we have many chances to see wadaiko in our daily lives. Only in festivals if we have, I guess.

Even though wadaiko was born in Japan, it may not be so familiar to Japanese people.

But, wadaiko has especially long history among the musical instruments. 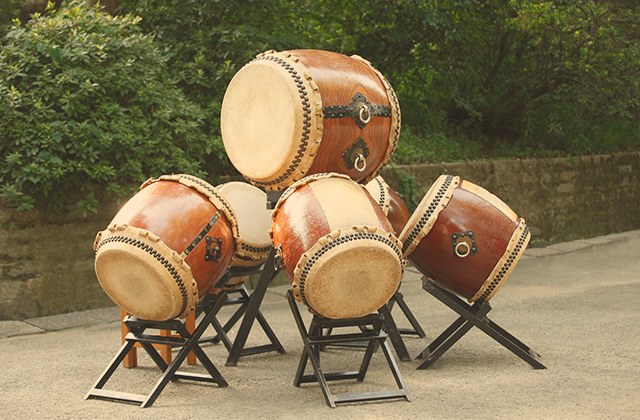 It is guessed that wadaiko has been existed since Jomon period.

Nowadays, it is used as a musical instrument to “play”, but at that time, it was used as one of the ways to “convert information”.

In the medieval period (from Kamakura to Muromachi period), it started being used at festivals. It had taken hundreds year before people started using it as a musical instrument.

Also, by busho (Japanese military commander), wadaiko was sometimes used as a “Jin-taiko”, a tool to keep the order of their troops.

Although we hardly find it nowadays, but it is really familiar musical instruments to us, human beings.

The Varieties of Wadaiko

Speaking about wadaiko, most people might think of something like drumming game we find at Japanese penny arcades.

The drums like that shape are wadaiko, but of course not only that.

There are three different varieties of wadaiko.

The first one is “nagado-daiko” (long shape drums).

It is often used at the festivals. This “nagado-daiko” is the most popular type.

Its sound is the most powerful among “wadaiko”. Some people should have seen it once.

It is lighter than nagado-daiko, so you can shoulder and play it.

Although the power of the sound is less than that of nagado-daiko, you can make your performance wider because you can move freely.

Tsukeshime-daiko has the characteristic of high-pitched sound.

It is often used for nou, kabuki, or minyo (Japanese folk songs).

Like this way, there are many varieties of wadaiko. The most common drum which many people imagine is “nagado-daiko”.

There are some professional troupes of wadaiko.

One of the most famous troupe is “Sai”, a professional wadaiko troupes.

“Sai” is performing not only in Japan but also abroad.

It is surprising that there are wadaiko performances abroad. Also, this “Sai” gets high reputation in foreign countries. You can get the reason by watching the video. It is absolutely cool! (Please check it out because it takes only around one minute)

Sai is consisted of young males at the age from 10s to 20s and actively performing in Japan. They sometimes offer the song for movies and perform for TV commercials.

Sai has three performing stages in Kanto area at the beginning of next year. You can rarely see the stage, why don’t you visit it?

＞＞ Watch the website of “Sai”, a professional wadaiko troupe

“Wadaiko”, Japanese Drums which Japan is Proud of

Although there are various kinds of drumming instruments, I know nothing which has as powerful and echoing sounds as wadaiko.

We have more chances to hear the sounds of wadaiko in our daily life than we think. Like the video above, it’s sometimes used for TV commercials.

If you have the chance to visit any festival, listen to the sounds of wadaiko carefully. You can feel the beautiful “wa(Japanese)” sound which you can enjoy only in Japan.

We’re introducing eccentric kinds of calligraphy like pen-calligraphy or colored calligraphy, and instructions for origami.

Please take a look at traditional Japanese cultures we boast to the world!

>>To Other Origami Instructions

>>Watch other works by Ms. Maria

>>watch other works of iro-moji