“Ninja” is really popular all over the world. The representative popular Japanese comics, NARUTO uses ninja as characters in the story, and ninja is really familiar to Japanese people.

Today, I’ll introduce some spots and premises where you can try being ninja!

If you try being ninja, you will get to know more about Japanese history and culture!

What are the Ninja Premises?

Ninja premises look usual houses at first sight, but there are various gimmicks to hide or run away from enemies or even to catch enemies in the building.

There are various gimmicks such as pitfall traps and hidden rooms in ninja premises in case of emergency. The buildings are full with old wisdom of ninja.

At ninja premises, you can experience the gimmicks which were really used in the past. Not only those who like ninja, but also those who haven’t been interested in ninja, must be able to enjoy there!

Then. I’ll introduce ninja premises and spots where you can try being ninja around Japan!

What I’ll introduce at first is Koka Ninja House in Koka, Shiga.

Koka was one of the ninja styles, and especially good at pharmacy. As the remains of that, even now there are many pharmaceutical companies in Koka city.

Koka Ninja House was built over 300 years ago.

Koka Ninja House is the only real ninja premise in Japan. So only here, you can experience the gimmicks which were really used in the past.

There are some tools which ninja used in their usual lives over 300 years ago, and you can learn the history of ninja. Further more, you can borrow the ninja clothing and try throwing shuriken(throwing star).

If you want to try being ninja, you must go there!

EDO WONDERLAND Nikko Edomura is a spot where you can experience the past Japan.

EDO WONDERLAND is an amusement premise in Tochigi where you can experience the Japan in Edo period, and it represents the street sight in that period all over its large site.

Not only being ninja, you can try being samurai and traditional Japanese archery as well. You can also eat delicious soba(buckwheat noodles), a representative Japanese food.

And surprisingly, you can take a Japanese houseboat. There are rarely such spots where you can feel the past Japan on a large scale.

It might be good to go there with children. Please enjoy the past Japan as much as you like!

Oshino Ninja Village is a new ninja premises which was built in 2015 in Yamanashi. There are various gimmicks such as secret hall and hidden door in the Ninja Karakuri mansion in Oshino Ninja Village. You can enjoy the mansion like a maze.

Of course you can try throwing shuriken, and borrow ninja clothing as well.

And surprisingly, you can see Mt. Fuji, which was registered as a World Heritage, from Oshino Ninja Village. This is the best spot where you can try being ninja enjoying the sight of our precious Mt. Fuji.

Igaryu is one of the most popular ninja styles with Koka which I introduced at first. Ninja MUSEUM of Igaryu is the place where you can experience Igaryu ninja style in Iga, Mie.

At Ninja MUSEUM of Igaryu, female ninja take you around the ninja house, and show gimmicks right in front of you. 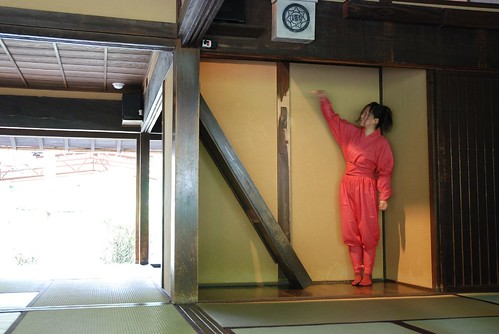 And it displays over 400 tools which ninja really used in the past including shuriken. Also, Ninja Show which are performed at Ninja MUSEUM of Igaryu is very powerful.

And it sells some original ninja goods which you cannot get anywhere else. If you give them to your foreign friends, they must be pleased!

NINJA DOJO and STORE is a spot where you can try being ninja opened in Kyoto on May 2015.

Of course you can try being ninja and experience authentic training.

Its website and facebook page is all written in English, so it might be for foreign people. It should be a great memory to try being ninja in the historical city, Kyoto.

Ninja is a unique culture to Japan. There is no other being like ninja in the world.

At the ninja premises I introduced, you can experience the gimmicks and throwing shuriken in the same way as ninja in the past.

KARAKURIJAPAN introduces traditional Japanese technologies and crafts. Calligraphy which has been familiar in Japan since long ago is one of them.

Anyone can write pen-calligraphy work just with paper and a calligraphy pen. Please try it as one of the traditional cultures which you can touch easily!