21 NovOrigin of Japan ~ What is “Bushido” which we are Proud of to the World? ~

Origin of Japan ~ What is “Bushido” which we are Proud of to the World? ~

I haven’t said that before, but I am a Japanese and living in Japan. I’ve never been abroad, so I’m not sure how Japan looks for foreign countries.

However, I can feel that Japan is a little different from other countries by worldwide news and talk with foreign people.

Not only that we won’t go to war, but also Japanese people are said to be polite and cooperative, and keep good order. It is also a good point of Japan to be safer than other countries.

This good point of Japanese people should come more than a little from bushido, ideas of past samurai.

I’ll write about what bushido is today.

If I explain bushido shortly, it is “ideas of samurai”. Japanese warriors are called “samurai”, which were unique Japanese name for the social status, in the past, and they are said to have lived with bushido as their ideas.

Then, what idea this bushido is? 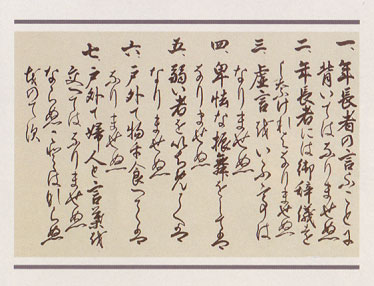 There were some domains called “han” each of which is like a small country in the past Japan.

Among them, the domain of Aizu was very influential in Edo period. And this domain of Aizu set “The Commandments for Aizu Samurai” as bushido education.

Do not disobey what elders say.

Make a bow to every elder.

Do not be cowardly.

Do not bully weak ones.

Do not eat outdoors.

Do not talk to women outdoors.

It’s not for all domains, just for Aizu. However, it is said that the ideas to “protect your domain” and “live faithfully” were common in every domain.

Those ideas influence current Japanese people’s good points. For sure it depends on people if they think all of those commandments are right or not.

It should be related to this bushido spirit that Japan is highly evaluated by the world.

Then, why has bushido been spread to the world?

It is related to a Japanese philosopher, Inazo Nitobe. He is known as the portrait on the previous 5000 yen bill.

He wrote a book “Bushido: The Soul of Japan” in USA to let people know Japanese culture. Bushido has been spread to each country in the world by this book.

“Bushido” is read not only in USA, but also in European countries. It’s translated to many languages such as Germany, Italian, Russian and Norwegian, and bushido has been spread all over the world. It is said that some famous people in USA like the former President John F. Kennedy were keen on this book.

So, the book “Bushido: The Soul of Japan” influences what foreign people think bushi or samurai is.

What Japanese People are Now Comes from Bushido

The reason why Japan is highly evaluated by the world is considerably related to the ideas of bushido.

As it is said that good point can be bad point, there might be some bad points.

However, it’s highly evaluated overseas, and above all, Japan is safe and people can live in peace.

The reason why we can live in this way is that there is bushido, which bushi or samurai made in the past.

KARAKURIJAPAN introduces traditional technologies and crafts which such Japanese people have made to the world.

We introduce some works of origami, which is born from unique Japanese custom, and calligraphy, which has been familiar to people for years.

Why don’t you touch Japanese culture through KARAKURIJAPAN?