09 NovAn Iro-moji(colored calligraphy) Work – Cha(tea) -What is the Difference between Japanese Tea and Chinese Tea?

An Iro-moji(colored calligraphy) Work – Cha(tea) –
What is the Difference between Japanese Tea and Chinese Tea?

Today is the introduction to an iro-moji(colored calligraphy) work! What we’re going to show is the word of “cha(tea)”

I think some of you drink tea in your daily life. Sometimes you drink after meals, sometimes when you get thirsty.

The Tea Drunk in Japan are “Japanese tea” and “Chinese tea”

In Japan, we mainly drink two kinds of tea. Did you know that?

One is called “Japanese tea”.

There are various kinds among green tea. Sencha, deep-steamed Sencha, Hojicha, Mactha which is used for sweets and so on. Most of tea we usually drink is “green tea”.

Also, there is another kind of tea which is popular in Japan. That is, “Chinese tea”. Nowadays, there are increasing number of cafés specialized for Chinese tea.

The most representative one among Chinese tea is “Oolong tea”. I think many of you choose it when you buy tea at convenience stores.

Besides, black tea is also representative Chinese tea. So are Jasmin tea and Pu-erh tea.

Like this, there are two different kinds of tea drunk in Japan, Japanese tea and Chinese tea.

What is the Difference between Japanese Tea and Chinese Tea? 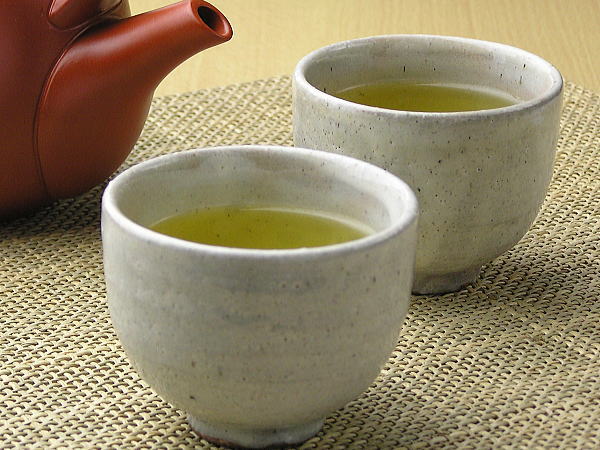 These two have different manufacturing procedure.

Chinese tea is roasted to prevent its leaves from oxidization and fermentation, and by doing this, the smell gets enveloped. Jasmin tea and Pu-erh tea have smells because of this procedure. The taste is also good.

We can’t say either is better, both have each characteristics.
It would be fun to compare these two kind of tea at a café where you can try both of Japanese tea and Chinese tea.

Although the introduction of the difference has become quite long, I’ll introduce you the iro-moji work from now! The person who’re going to write is Mr. Ken Nishimoto, an iro-moji shodo calligrapher.

What a great work is he going to write today!?

I’ll introduce here, and you can watch more details in the video!

▲ At first, he writes a draft with water. This draft will be the base of the work.
The word is beautiful with great taste.

▲ The first color he put is green. It’s the color of tea leaves. As I see the video, he is putting some kinds of green colors.

▲The next color he put is brown. We can feel the nature with the combination of green and brown color. After the brown color, he puts yellow and red color.It is a bit unexpected that he uses these colors.

▲In the end, he puts the brush colored with the silver ink on the water. By doing this, the green color is spreading widely! It is so beautiful! It might be difficult to imagine just from the explanation, so please take a look at the video!

▲The complete of the work of iro-moji shodo, “cha(tea)” by Mr. Ken Nishimoto! Although the colors he used are less than usual, the combination of colors which make us imagine tea is so beautiful! Great, Mr. Nishimoto!

The Explanation by Mr. Ken Nishimoto himself.

Then, let’s take a look at the explanation by Mr. Nishimoto himself!

A few days ago, I took a course and see demonstrations of how to make tea.

So I learned a lot about tea.

After tea leaves are plucked, they get steamed and become wet and soft.

Then they are kneaded, and dried.

After that, they become red tea if they get fermented,

green tea if they don’t get fermented, or hojicha if they get roasted.

I learned variety of things about tea like that.

Then, what impressed me there was green color of leaves.

It was very beautiful, and felt like they are surely alive.

So I expressed that feeling by this part.

It is a good point of gansai(Japanese paint) to be able to express feeling like that.

And also there is red here.

There are various types of tea.

So I also used red to express the wide range of tea.

I see, he used red color in order to represent the color of black tea!

As I heard Mr. Nishimoto’s explanation, I got to feel like taking a course of making tea!

The work was great as always, Mr. Nishimoto! Thank you!

How was iro-moji shodo? I think you felt different attractiveness from normal shodo.

There is no same shape or mixture of colors for iro-moji shodo. The work you write will be your only work in the world that only you can write.