A Standard of Origami Works, Crane!  The Lesson of How to Fold “Tsuru”(crane).

Hello! I’m Yonosuke, a writer of KARAKURIJAPAN!
In today’s article, I’ll introduce you the instruction to fold origami, which is traditional Japanese culture!

What I’m going to introduce you today is how to fold Tsuru, which means a crane, in English.
It is most common thing to be made from origami.

Today, I’ll show you how to make the crane from origami!

Crane is the most Common Origami Work 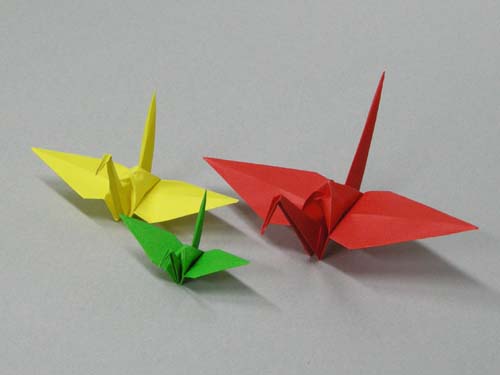 I should say crane is the most common thing to be made from origami.

Japanese people at many generations know how to fold it, and almost all of the text books of origami show the instruction of it.

Crane is especially popular to fold among origami works, which is traditional Japanese culture. It is said that it has been folded from Edo period.

Tsuru Made from Origami is Used at Festivals and as a Lucky Charm.

In Japan, “orizuru” which means a crane made from origami is accepted as a lucky charm. Among that, renzuru, which means chained orizuru, is used as a decoration or a lucky charm at festivals.

This is the scenery of Sendai Tanabata Festival, which is held in Sendai in every August. This decoration is made all from orizuru. How moving it is…! I want to actually see it once!

Also, senbazuru, which means chained thousands of cranes, is folded as luck for wins. We often see it at Koshien, which is Japanese national high school tournament in summer.

In this way, orizuru is regarded as such a lucky item in Japan. So you shoule know how to make it!

Then, I’ll introduce you how to fold a crane which is a standard of origami works.

The Instruction How to Fold a Crane, a Standard of Origami Works.

I’ll show you here, and you can watch more details with the video.

Please check it out!

1．Colored side is up, fold it in half diagonally to make creases. Turn it over, and make other creases vertically and horizontally.

▲At first, colored side is up, and fold it in half diagonally to make creases.
Then, turn it over and make other creases by folding it in half vertically and horizontally.
The way of making creases cause the difference of quality at the end. So, fold them firmly!

Although this process is not general, we are doing that to reduce the error range at the next step.

2. Fold it in half diagonally. Open and squash it into a square.

▲Fold it in half diagonally. Open and squash it into a square. Using the creases you made, you can fold it easily.

3. Make creases along with the center, and make a crease on the upper side as well.

▲Make creases both of the right side and left side along with the center.

▲Then make a crease on the upper side.

▲Like the picture above, open and squash it. Using the creases you made, you can fold it easily.

You have to make the valley creases into mountain folds for the upper part.

This technique is called “petal fold”.

Turn it over and do the same thing as 4. again.

▲If you fold exactly, it will be the shape like this picture.

5. Fold it in half to make it skinny

▲Fold it in half along with the center to make it skinny. Let’s do the same way for the other side.

Spread the wings and make the shape tidy to complete!

How did you do!? Did you fold successfully? I would like to learn this procedure for anyone who are thinking of starting origami.

You use many basic techniques for folding a crane. If you acquire it, you will be able to fold various kind of things with origami! Let’s master it!

KARAKURIJAPAN introduces many other instructions of folding origami.

You can make anything with just a piece of paper. Let’s try it!

>>To Other Origami Instructions